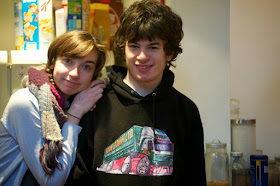 In 2013 Connor Sparrowhawk (with sister Rosie) drowned in a bath following a seizure in a National Health Services treatment unit in Oxfordshire, England. He was alone.

Today a jury inquest ruled his death had been "contributed to by neglect" and said staff had poor communication with Connor's family and inadequate training and supervision.

The 18-year-old had autism, epilepsy and intellectual disability. The NHS trust that ran the unit initially attributed his death to natural causes, but his parents called for an independent investigation that found his death preventable.

Earlier this year we interviewed Connor's mother Sara Ryan, a senior researcher and autism specialist at Oxford University. "The staff had the knowledge," she told BLOOM. "They knew he was epileptic and I'd told them he was having seizures in there and was sensitive to medication change. They hadn't properly assessed his epilepsy and he was left unsupervised in the bath."

Please take a moment to read the family's story.